A rifle is a long barrelled firearm designed for accurate shooting.

It has a barrel with a helical pattern of grooves known as rifling cut into the bore wall.

The purpose of the grooves is to impart spin to the projectile as it travels down the barrel.

The spin persists after it leaves the barrel, which imparts stability to the projectile and prevents tumbling in flight. 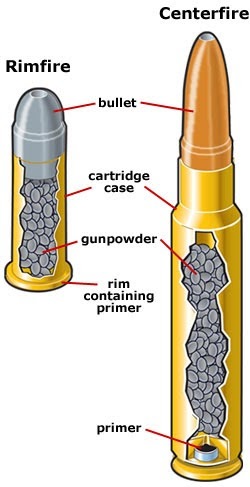 The terms bullet and cartridge are often used interchangeably, which can cause some initial confusion.

A rifle cartridge is composed of four parts –

The projectile is the component of firearm ammunition that is expelled from a gun barrel during shooting.

Rifle bullets are elongated and aerodynamically efficient, which improves range and accuracy

All bullets have a primer whose purpose is to ignite the propellant powder in the cartridge.

When you pull the trigger of a firearm, a spring mechanism hammers a metal firing pin into the back end of the cartridge, igniting the small explosive charge in the primer. The primer then ignites the propellant

Generally there are two types of cartridges in target shooting,  and Rimfire bullets. 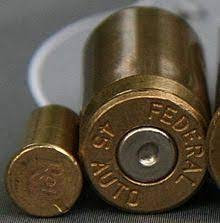 The calibre of a firearm is the nominal bore diameter of that firearm.

Calibre is expressed in either metric or imperial measurements, depending on where the cartridge was developed (usually imperial if inside the United States versus pretty much metric anywhere else in the world)

Rifles are cartridge specific, that is any particular rifle can only load one specific configuration of cartridge (though the manufacturer of the various components can vary greatly).

While modern firearms are generally referred to by the name of the cartridge the firearm is chambered for, they are still categorized together based on bore diameter.

A very common target shooting cartridge is the .308 Winchester where the .308 is the actual bullet diameter measured in inches. Sometimes this same cartridge is called 7.62×51 (also referred to as 7.62 NATO). To break down the structure of this cartridge designation, the first number refers to the diameter of the projectile. (In this case, 7.62 millimetres). The number following the “x” typically refers to the length of the cartridge, also measured in millimetres.

When referring to the type of cartridge, the decimal point and word calibre are sometimes dropped.

These calibre designations might actually give a maths junkie a headache, because the numbers are rarely exact measurements.