MURWILLUMBAH SHOOTER ALAN CRONK SCORED A COMPETITION DOUBLE TO COME OUT ON TOP IN THE HARD FOUGHT GOONDIWINDI RIFLE CLUB ANNUAL PRIZE SHOOT HELD AT THE WEEKEND.
Alan, one of the most consistent A Graders on the shooting circuit, prevailed in tricky wind conditions on Saturday to win the Cam Ellis Memorial with a score of 147.9.

The conditions tested a strong field of 69 shooters drawn from across southern Queensland and northern NSW, with visitors from as far away as Geelong and Canberra.

Alan finished fourth in a tight bunch of shooters who all dropped two shots in the Sunday Open shoot, but that was enough to secure the Grand Aggregate for the weekend with a total 295.20.

Ipswich shooter Ken Lobwein had a consistent weekend. He was a shot behind in second placing in the Cam Ellis, placed third in the Sunday Open and was second on Grand Aggregate.

Goondiwindi local Robert Doughty prevailed by a single centre bull over Rob Bondfield from Southern Downs in the Sunday Open, 148.17 to 148.16, and placed third in the Grand Aggregate. 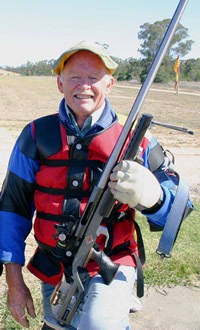